Yes, this post is a bit late, but I have been on a whirlwind and I am catching up! On Friday, March 19 I had the pleasure of spending the day at the Dyson Headquarters in downtown Chicago. It was awesome! We started the day with a quick tour of the Dyson office. I would expect nothing less for such a major company. It was modern and state of the art, open and pretty damn cool!

We had breakfast in their cafe consisting of bagels, a huge variety of muffins, fresh fruit and coffee. Gotta have coffee!! Especially after the long drive there, and navigating one of those famous swirly downtown garages. 🙂 We sat around a huge table together ala conference style. I believe there were 14 of us. We were joined by a few Dyson employees. We did our “grammar school” introductions. 🙂 “Hi, I'm Kris Cain aka LittleTechGirl. Uhmm… I have 2 sets of twins. My girls will be 7 next month, and my boys will be 4 in May. I have worked in IT for the past 13 years or so.” It was quite fascinating listening to where everyone else came from and what they were up to. 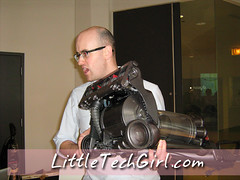 very smashing accent! He explained to us the engineering behind the Dyson. We learned why Dysons are so different and so much better.

The company was started in the UK in 1993. They burst onto the scene with the first ever bagless vacuum. They have been on the rise ever since. there are currently 13 models that include uprights, handhelds and canisters. Their designs are revolutionary and they are fun to use.

The day was awesome (but I said that already)! We even did some arts and crafts. The point of our task was to figure out a way to trap a spider in a humane, neat way without having to touch it and without getting to close to it. We came up a couple of interesting ideas. Each was unique. One was biodegradable.

We ate, we played, we laughed, we vacuumed (of course!) and we talked. Did I mention that we ate?? Besides breakfast we had a delicious catered lunch, and the day was topped off with afternoon tea at the Drake hotel complete with mini sandwiches and sweets. It does not get any better than that! We also got an announcement that we would be receiving some goodies! More on that later. 🙂

And thank you so much to Valerie of Dyson and Danielle of Ketchum for the great, great day!