I wrote before about the fact that I am lucky enough to be a part of the Playstation Family Ambassador program. We got a super early look at a demo unit of the PS Vita which launched today. It is an awesome handheld gaming unit that breaks the barriers between gaming on your handheld system and your PS3.

I don't have the pleasure of owning one yet, so I can't give you a hands on review, but from the bit I have seen it is awesome. This past Sunday here in Chicago I co-hosted an event with MJ Tam of Chicagonista who is also a member of PS Family. It was a Vita preview party and it turned out great. We had 71 people in attendance including moms, dads, and kids who wanted to get their hands on a Vita for some gaming before the launch.

One lucky attendee even won a Vita! Zoey will be among one of the first to get a Vita. Yes, I am insanely jealous. 🙂 But, congratulations Zoey!! I know you will love it.

The staff at the Vita lounge was awesome. They were on hand to help us learn the Vita and they made sure that everyone that wanted to play had one in hand so there was no fighting. 🙂 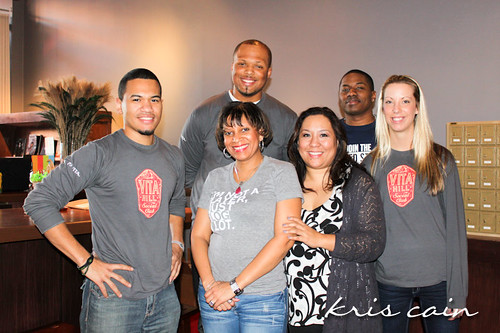 The Vita comes in both WiFi and 3G versions. The 3G is supplied by AT&T. The Vita features a 5″ multi-touch screen, rear touchpad, front and rear cameras, motion sensors, and much more. There has been some talk of the Vita possibly being too complicated with all of its buttons, but the kids at Sunday's event including my own had no problems figuring out how to play.

Here are the full specs:

Here are more photos from our event: