Earlier this year I was invited to fly out to LA to get the inside scoop of the new movie, The Croods. Unfortunately  I had to pass on the invite due to things going on at home. 🙁 However, I can see by the buzz on the internet that the movie is great.  I hope to be able to take my kids to see it in the next few days. The movie had a very strong box office opening when it hit the screens on March 22 beating out other movies to take the stop spot.

The Croods is a fun 3D comedy adventure that follows the world’s first modern family as they embark on a journey of a lifetime when the cave that has always been their home is destroyed. Traveling across a spectacular landscape, the Croods are rocked by generational clashes and seismic shifts as they discover an incredible new world filled with fantastic creatures — and their outlook is changed forever.

If you have not seen it with your kids yet, you should.

And after seeing the movie, if you just can’t get enough of the Croods on screen then you can also play the iOS game on your mobile. The Croods by Rovio Entertainment is available on iOS and Android. In the game you use the characters to build your world using trees, fruits, and more. You also capture and tame adorable little animals along the way.

If you love games like the SIMS you will love this one. Check out the clip below for more on the game.

Download The Croods for iOS from the App Store or on Google Play. 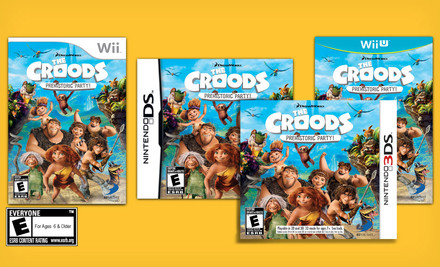 The Croods: Prehistoric Party! for Nintendo DS, 3DS, Wii, or Wii U (Up to 27% Off). Free Shipping and Free Returns.
More details at Groupon

The Contest – The Croods: Prehistoric Party for Wii

If the Wii is your passion, then there is something for you too! The Croods: Prehistoric Party! combines the ultimate fun of a family party game with Croods-style action as you journey through 30 unique and addictive multi-player mini-games. Game boards bring the Croods’ world to life. The game is rated E for Everyone, so it is great fun for the whole family.

Each prize pack is valued at around $45.