You are here: Home / Family / Keeping Your Kids Informed about Smoking and Vaping 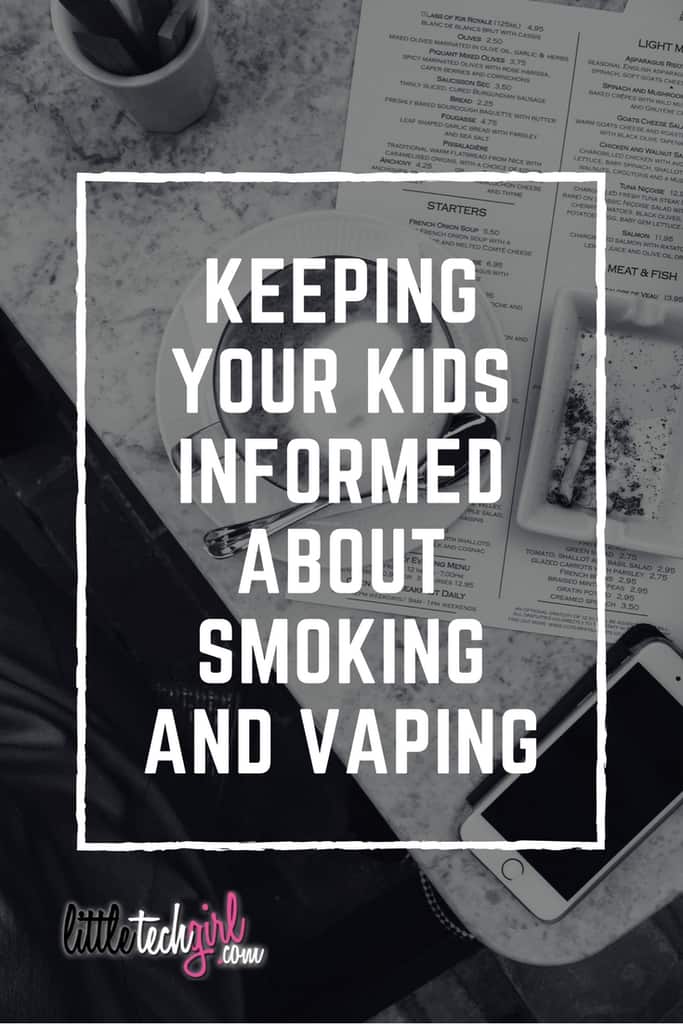 As parents, we sometimes have tough conversations with our kids… drugs, sex, alcohol… it's our responsibility to teach them right and wrong along the way. Yes, they will make their own decisions, but we have to do our part. We have known about the dangers of smoking for many years. Smoking can cause lung cancer. Smoking can cause throat cancer. It can trigger asthma, cause coughing episodes, cause emphysema, and a host of other health problems. Many people have taken this to heart and have stopped smoking. Others continue to do it anyway.

According to the CDC, cigarette smoking is responsible for more than 480,000 deaths per year in the United States. That is a HUGE number! It's very important that kids and teens are aware of these dangers. Many people who start smoking do so as teens. This part may be easy. They see the news. They watch TV. They may even know relatives that have passed away from smoking-related illnesses. Some of them may have even tried cigarettes and decided that they were not for them. I took one puff of a cigarette when I was a teen and decided that it was disgusting. I never touched one again. For me, this was easy. For others, it might not be.

For parents, something else that may not be easy is convincing them that something new making the rise among teens should still be approached with caution…. vaping.

Vaping is the act of inhaling and exhaling the aerosol (vapor) produced by an e-cigarette or similar device. These devices do not make smoke, so many teens think it is not “smoking”. They instead produce a water-like mist. But, it is not water, so, for some, it can be just as dangerous as smoking.

Now, it is definitely not as potent as smoking. This cuts down on a lot of the nicotine that is transferred. However, there is still some. It is said to be eco-friendly. There is no physical waste.

Vaping appeals to teens and young adults because the so-called e juice comes in flavors. Pair this with the fact that the devices are easy to transport and can even be passed for pens.

Now, if you are of age… go for it. However, at the same time make sure that your kids know that just like smoking, vaping is for adults. Visit a vaping website and they ask for age verification before entering. This should be the same for obtaining the devices. They may have friends that do it, and peer pressure is a real problem for some.

Keeping them informed is a very real and important part of helping them make smart decisions. Talk to your kids!

Previous Post: « 7 Ways To Welcome Spring Into Your Home
Next Post: Dirty Laptops are Nasty… It’s Important to Clean Your Laptop »