You are here: Home / Potpourri / Guest Post: Apple vs. Android 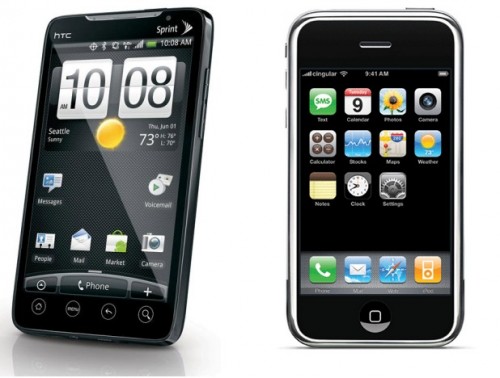 As you all undoubtedly know, I am a phone freak. I have tested several phones. I own an iPhone 3Gs and an HTC Evo. I am always watching out for the next best thing in smartphones. I have not yet gotten an iPhone 4. I don't think I'll be upgrading to one of those. Actually, the iPhone is my work phone. And rumor has it that soon my job may stop paying our bills. ATT is expensive, so if that happens, I will be sticking with Sprint and the Evo. Pick your mouth up off the floor :), yes I may defect to the other side. Anyway, when I saw the below guest post, I thought it was a great fit  here and echoes what I have been thinking lately. I am madly in love with my iPhone. But honestly? I am falling a little more in love with the Android OS. I adored it on the Droid X. It rocked on the Incredible. And it's just about perfect on the Evo. There is always a little room for improvement, but that is mostly with that apps. Overall, it is stellar. Enjoy this post from Dial A Phone.

When it comes to the current battle raging between different smart phone operating systems, there are two titans that clash in the statistics and have divided the populace. Apple and the iPhone have dominated the smart phone market ever since they brought it to mainstream consumers, but the rise of other providers has given them competition to defend against. One of the front runners is the Android operating system, powered by internet search giant Google, which has quickly taken centre stage.

The downside of the Apple system is that you can get it on an iPhone and that’s it, there’s your limit. A new iPhone is released periodically with even more improved features, such as the brand new iPhone 4, but every iPhone is just an update of the old. There isn’t much choice or variety, and even though many argue that you don’t need an option when you’re getting the “best”, the Android system clearly has the advantage here. Although originally it was the manufacturer HTC that adopted Android for all its phones, others have quickly picked up on its success. As a result, there are a huge variety of smart phones on the market that all work with the Android system, such as the brand new Samsung Galaxy. This phone is said to rival the iPhone in many ways.

Whether you choose an Apple phone or an Android one is up to you. Apple will always have many diehard fans and remains one of the leading providers in the world. Android isn’t necessarily a match for the iPhone because in many ways the two differ. The main issue is that for the first time in a while, Apple is really going to have to watch its back. The Android isn’t the only operating system providing competitive features and capability, with the likes of Blackberry and Samsung’s Bada OS also attempting to make an impact on the smart phone scene.

If you want to check out the latest Android or Apple news then head down to Dialaphone and find all the latest information on the blog now!