Yep, I am STILL posting CES recaps! On the first night that I was in Vegas for CES, I attended a party as a VIP guest for my friends at AMD. Boy as I glad that I did not miss that! It was great. There was great food, and great fun. The band on tap was Brother Magnum and the Razor Bumps which traveled to Vegas with AMD. They are originally from Austin, TX. They were really good!

We were treated to some great music before Joel McHale hit the stage to host his hilarious mock talk show with reps from AMD and Microsoft to talk about the future of computing. Up first was Dirk Meyer, CEO and President of AMD (whom I just learned resigned 8 days ago!) He was followed by Stevie B. of Microsoft who told us some cool things about the Xbox. Did you know that the Xbox is powered by AMD?? (More on that later). Up last was Joel Silver, founder of the Imaging Science Foundation who seemed to get quickly silenced by McHale who seems frightened that brought PowerPoint slides! 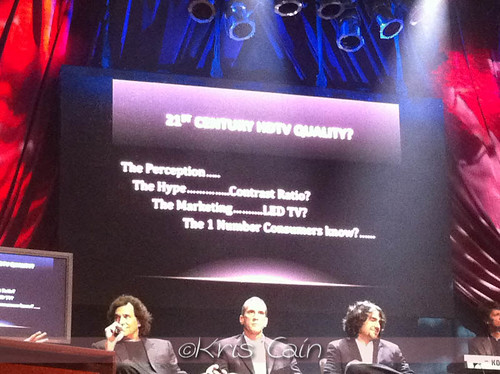 There was good music, good company, some laughs and they even gave away a few XBox 360s! We got to take a photo with Joel after all the fun. Very cool, very tall guy!

Here is a video montage of some of the fun!

During CES AMD announced their new chip, the APU. More on that coming up!